The Art and Science of Sandalwood

For Andrew Brown, the nuances of Sandalwood Album oil have become second nature. As Head of R&D for Quintis, he is caretaker of this precious tree - and the potent, pure oil that it produces.

It’s only mid-morning in Kununurra in Western Australia’s far north, but the air is already heavy with the promise of the heat to come. Andrew Brown knows the importance of starting the day early up here, so he’s been at work for hours, walking up and down the sprawling stands of Indian sandalwood he’s here to inspect.

Harvest is only three weeks away, so to find any signs of damage now would be a blow: aside from taking 15 years to reach maturity, the endangered Indian sandalwood (Santalum Album) is one of the rarest plant crops in the world. Its precious oil has been highly prized since the time of the ancient Egyptians for its healing properties and rich fragrance. And while the trees once grew throughout Asia, overharvesting and unscrupulous black-market trade mean this plantation, nestled in the lush tropical north of Australia, is the only commercial, sustainable enterprise of its size.

In his role as Quintis’s Head of R&D, Andrew has spent 10 years as the caretaker of this precious tree ­– from its painstaking cultivation and growing process (sandalwood is semi-parasitic so requires at least four host trees during its life) through to the extraction of the golden oil. He spends his time moving between the crops in the Kimberley, the distillery in Albany and the company headquarters in Perth where his research is based. “I love it because I get to be creative,” Andrew says. “I never do the same thing each day.”

Currently, the Sandalwood Album oil produced by Quintis is split between pharmaceutical companies, aromatherapy brands and the producers of some of the world’s most recognisable perfumes. The oil is highly prized for its spiritual, fragrant and medicinal benefits, as well as its action as a fixative, which allows a scent to wear evenly throughout the day.

“A good perfume composition is a triangle,” says Andrew. “At the top is what you smell first; the fruits such as citrus. In the middle are the florals; lilac, rose and so on. The base supporting it all is made up of base notes ­– and this is where sandalwood comes into its own. The other fragrances stick to the sandalwood, so it will last the whole day.”

You have to be able to interpret the oil; there’s an artistic component in determining if it’s going to meet the specification of the client.

Familiarity with subtleties of scent – and the language used to describe them – is an important skill that Andrew and his team are required to possess. “You have to be able to interpret the oil; there’s an artistic component in determining if it’s going to meet the specification of the client. If it doesn’t, then you need to know what to blend with the oil so that it does.”

Andrew compares it to the ability to pick the bouquet of a wine. “Take shiraz, it has characteristic flavours associated with it, a rich sharp tone, spiciness, and so forth,” he says. It’s the same with sandalwood – there are odours that are true and odours that shouldn’t be there. And it’s about being able to identify them.” 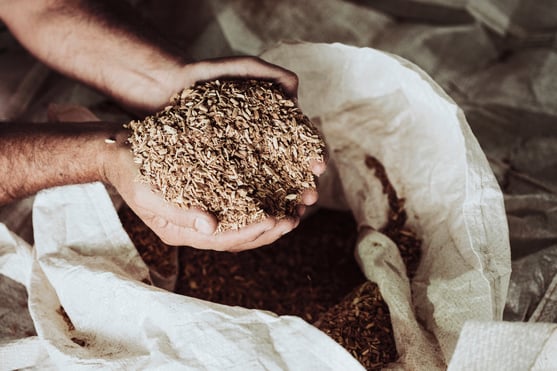 And just like wine, the production of a high-quality oil requires a deft touch; a mistake at any stage can compromise the output. “After the harvest, you can stuff things up by not handling the wood appropriately,” says Andrew. “You have to dry it out for the correct amount of time and then carefully remove the bark and sapwood so only the heartwood is left.”

Blending is another delicate yet essential process that occurs from the very beginning. Sandalwood harvested from the base of the tree has different characteristics to that grown near the top. “You also get inter-tree variation, but that’s not such a problem,” says Andrew. “So after the wood is processed we test the chips to get the oil information, then mix them in order to create a standard product.”

The oil is extracted by a painstaking, four-day process in which steam is passed through the wood chips and then “washed”, resulting in the essential oil.

“Steam distillation is one of the least invasive methods of extracting oils from plant material,” says Andrew. “The process is natural – it’s not done with chemicals – so it’s a very pure product.”

Andrew characterises the entire production process as a “balance of science and art”.

“You need to distil the essence that you want, without also producing the molecules that you don’t want. The art is in creating an oil that smells the way it should do. But we also use science so we can reproduce it to be the same each time; so it is the high-quality product the customer is expecting.”

As the producer of the world’s only pharmaceutical-grade Sandalwood Album oil, Quintis is heavily invested in finding new applications for this super-ingredient. 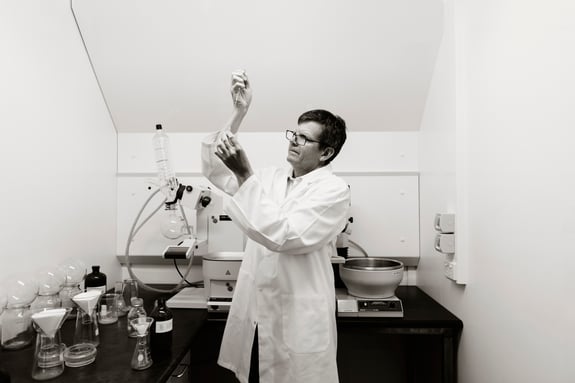 The art is in creating an oil that smells the way it should do. But we also use science so we can reproduce it to be the same each time; so it is the high-quality product the customer is expecting

“We’re doing a lot around the use of sandalwood in cosmetic applications; it has a good anti-inflammatory action and is a mild astringent, so our initial tests indicate it’s very effective in reducing redness and wrinkles and evening out skin tone,” Andrew says. “Combined with the oil’s well documented aromatherapy qualities – it calms the mind but still maintains alertness and attentiveness – we think we could achieve a multifunctional beauty product.”

“We’re also conducting some research with a US pharmaceutical company about the application of essential oils to treat skin conditions such as human papilloma virus, eczema and warts to certain types of stomach disorders.”

And while Andrew and his team may have the distillation process down to a fine art, they’re still always searching for ways to improve it.  “We have a new method we’re looking at implementing that will create less of a footprint,” says Andrew. “We think we will be able to save three-quarters of the energy we currently use.”

He credits his ability to spend his time looking for creative ways to both produce and use this time-old, valuable ingredient as deeply rewarding.

“There is a culture of continuous improvement here and you can see it in what we’ve done already,” he says, looking around at the woodland-like expanse of trees surrounding him. “We’ve got more than 12 thousand hectares of this special tree growing out here.”

To learn more about how we ensure we create pure Sandalwood Album, visit our oil page.

The Art and Science of Sandalwood